Why not buy a computer case with a pre-installed PSU

If you are reading this guide, you probably know that there are two reasons why:

Top-notch or simply good computer cases would rarely come with a PSU because computer-savvy users pick their PSUs to their taste:

Once we've decided we need a new PSU, it’s time to find out which one. We’ll need some basic knowledge here.

Modern PSUs provide the following voltages for your PC hardware: 3.3V, 5V and 12V. Almost all the hardware draws power from the 12V rail. So, 12V power output is the spec you’d want to check when buying a PSU.

The trick is that the advertised total power is almost always higher than the 12V output. You’d normally see 12V output to be 15-20% lower, e.g. a 600W supply would typically yield only 450-500W usable by your hardware. That’s an important thing to bear in mind.

Next step would be to calculate your actual total system power draw.

There are quite a bunch of decent online calculators out there. And here’s a very short guide to approximate the power draw, If you want to do it yourself:

On the average, you will get a total power consumption of 200-450W, depending on the hardware. We should be looking at a PSU that gives that much power output, plus, some 50W as a safety margin.

If we add all these together, the total wattage would be 334W at peak. If we compare this to the PSU specs in the above photo, we'd safely assume, we could add another GTX 970 to the setup.

Note: overclocking may increase power draw by a large margin.

When you may need extra Watts on your PSU (on top of the 50W safety margin):

However, if your PSU is way too powerful for your system, it may cause unreasonable power draw. That’s because at low loads PSUs are less efficient. If you have one of the above concerns, I’d add 100W or 150W at the most.

Now let’s consider other features that are important for daily use.

It’s more of a computer case (chassis) feature, but it’s important. We won’t consider mini-ITX HTPCs and other similar or more exotic cases.

So, inside your case, the PSU can be mounted near the top or near the bottom. Each approach has its advantages and downsides.

In my opinion, bottom mount design wins hands down. The drawbacks are minor and all fixable. That is why we see more and more computer cases with bottom mount PSUs on the market. 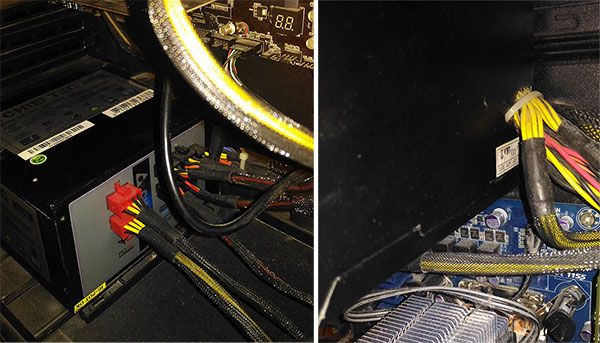 Also, there used to be computer cases with vertical positioned top-mount PSUs. I haven’t seen them for a long time and that’s good. Because it’s an evil design that should be avoided at all costs!

There’s a lot of marketing hype over the 80+ ratings, so a small explanation is in order.

Higher rating does not mean higher power output. Higher rating means more power is utilized and less power is lost to heat during the conversion:

So, a higher rated PSU is good in three ways:

Basically, you should only care about it, if you know how both designs work. If you don’t then just ignore it as it’s more marketing talk.

Power factor correction is required for a better utilization of power from the mainline.  A higher power factor is good in many ways:

So, an APFC-enabled PSU is your best bet.